For nearly two decades, proponents of revenue caps have been pushing for legislation that would lower city rollback rates and require mandatory property tax rate elections.  That push became more intense than ever in the last several months.

Beginning with the appointment of the interim Senate Select Committee on Property Tax Reform and Relief in 2016, and culminating (for now) with Senate leadership deciding not to concur with a modified revenue cap bill adopted by the House of Representatives during the special legislative session, legislators advocating for revenue caps have recently shown a disturbing willingness to use misleading (and even outright faulty) data to attempt to bolster their position.

Let’s take a look at some of the more notable examples of statistical malpractice from the past several months. 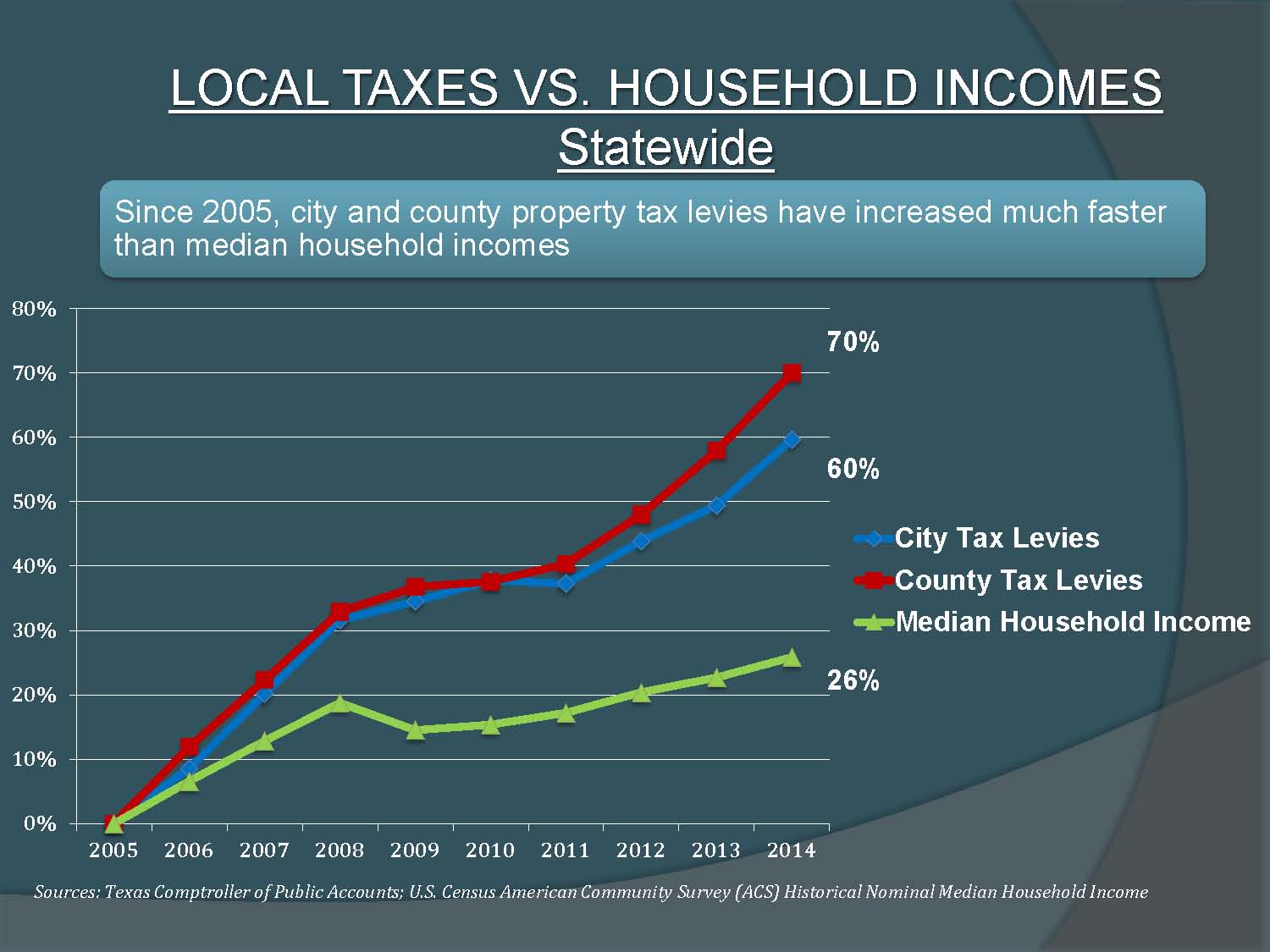 As it turned out, that comparison proved meaningless.  The total increase in city tax levies should not be compared with the average increase in household income. Why not? Put simply, there’s no relationship between median household income and the growth in total tax collections caused, in large part, by new construction. Texas continues to lead the nation in population growth. With population and economic growth comes new construction, and along with it come higher total tax levies.  Trying to compare a total to an average is an “apples to oranges” comparison.

In addition to understanding that the total levy figure includes new growth, the total levy figure also encompasses property taxes collected on single-family property, multi-family property, commercial property, industrial property, vacant property, oil and gas production property, and other types of taxable property. For the committee to compare a ten-year increase in total property tax levy from all of those sources with median household income in order to argue that individual homeowners are being taxed out of their homes was absolutely misleading because the tax burden doesn’t fall wholly on residential homeowners.

On January 30, the Dallas Morning News ran an article written by Data and Enterprise Reporter David McSwane. The article points out these misleading arguments used by proponents of revenue caps. For his article, McSwane interviewed independent economists and fiscal analysts.  They called the committee’s comparison “fallacious” and “worse than meaningless.” The article also includes a true “apples to apples” comparison using federal data showing that personal income has actually outpaced property tax bills in Texas (see chart below). The article is a must-read for city officials. 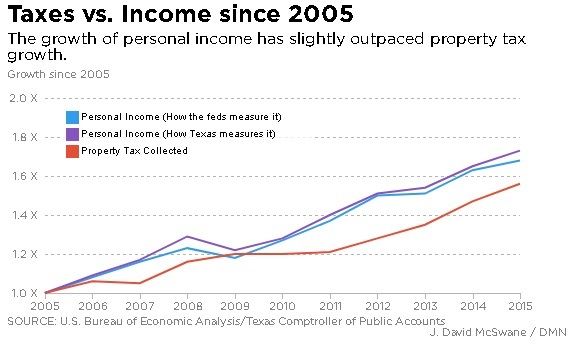 Making a big deal about one component of the tax burden is misleading at best. In fact, it misses the point that Texas, more than any other state, relies on local governments to provide services. And the legislature has chosen the property tax as the primary means of paying for those services, particularly with regard to the public school system.

Either way, Politifact Texas concluded that the statement was not only false, but “ridiculous.” According to the article, even the revised statement about cumulative savings contained “major flaws” and is “at best, a wild guess.” The statement earned the label of “Pants on Fire,” which is reserved for only the most outrageously false claims. Essentially, the statement assumed that cities would be raising property tax rates to the rollback rate every year, an assumption that isn’t supported by historical data. Comptroller data shows that in recent years over 60 percent of Texas cities have not adopted tax rates that would exceed the lowered proposed rollback rate of five percent.

During the 2017 special legislative session last summer, the author of S.B. 1 (the revenue cap bill) repeatedly stated that school property taxes have only increased 39.5 percent from 2005 to 2015, while city property taxes have increased by 71 percent over the same period. Here is the chart he showed to justify that statement: 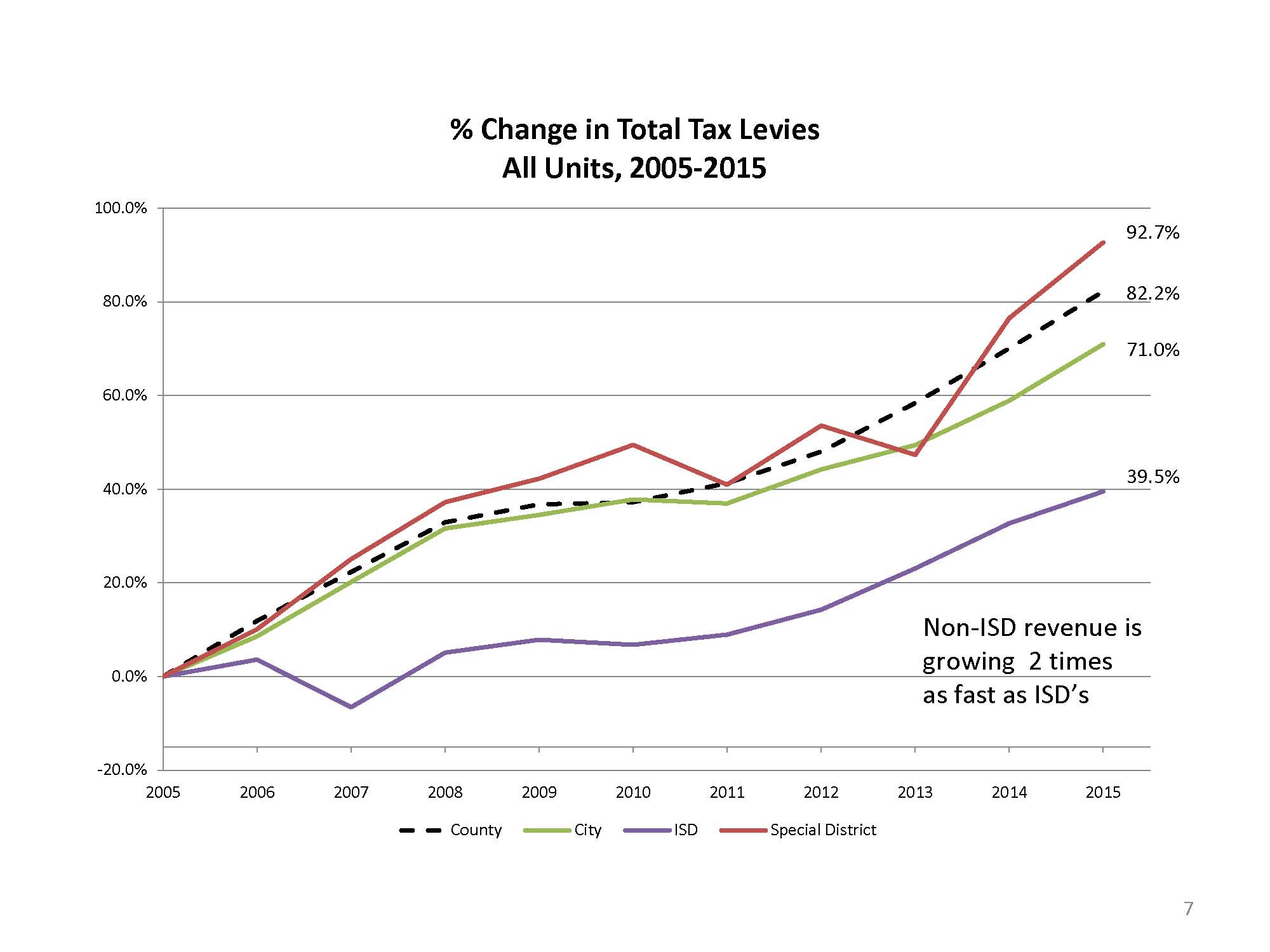 What’s interesting is that he begins measuring the increase in property taxes in 2005. Conveniently for him, 2005 was the year before the legislature significantly overhauled school finance by revamping the state franchise tax to fund public education. This opened the door for local school districts to lower their maintenance and operations tax rates significantly as that revenue was replaced by the new “margins tax.” In 2006, as intended, school property taxes dropped significantly because of action taken by the legislature. To include this artificial and anomalous drop in school tax levy in the comparison to city property tax levies over the same time period significantly skews the numbers.  Doing so makes it deceptively appear as though city taxes were and are increasing at a much faster rate.

The heavily reliance on misinformation over the last several months begs the question – why have some legislators and state officials been willing to embrace these faulty figures? And why now?

To answer those questions, one needs to look no further than the state’s budget. The state budget bill, S.B. 1, anticipates an estimated $6.9 billion increase in local school district property taxes during the 2018-2019 biennium to fund the Foundation School Program. Because the local school districts’ share of funding increases so dramatically, the state will decrease the amount of state funds it allocates towards the Foundation School Program by $800 million over the same time frame.

The chart below tracks the state’s share of funding as compared to funding from local property taxes. By 2019, the state’s share of funding the Foundation School Program is estimated to reach a low of 38.2 percent. A decade ago, the state picked up 46 percent of the tab for local schools. In short, the state is essentially forcing local school districts to increase property taxes to make up for the portion of school finance the state is no longer funding.

The following is actual language on public education funding from the state budget bill that was passed by the Legislature in May:

To make up for reduced state money going to school funding, the legislature passed, and the governor signed, a budget essentially requiring that property values – and the school property taxes derived from them – go up by almost fourteen percent over the next two years.

The recent reliance on questionable math to blame cities for property tax increases serves as a shiny object to divert attention away from the mounting evidence that the state legislature’s inaction on funding public education is the driving force behind property tax increases in Texas. Politically, it’s much easier for some in the legislature to blame cities for high property taxes and tap into voters’ perpetual distaste for taxes by skewing data to fit that narrative.

The legislature came closer to passing a revenue cap bill in 2017 than ever before. Different versions of revenue cap legislation passed both chambers during both the regular and special legislative sessions. Ultimately the House and Senate couldn’t agree on the details.

On the surface, it’s somewhat surprising that, when presented with the House version of revenue caps in the special session, the Senate proponents of revenue caps decided not to just concur and declare victory after years of pushing for the legislation. But given the reality behind the state legislature’s involvement in increasing school property taxes, the decision to reject the House’s legislation can best be analogized to the dog that finally catches the mail truck.

After all, once it was conclusively established that state-mandated limitations on city property taxes would not lower property taxes overall, who would those legislators then have to blame?