Somewhere in the files of a corporate-funded think tank, there is no doubt a memo from a public relations firm outlining a lobbying campaign to overturn city ordinances by state laws. The age-old battle to undermine local control traditionally has been waged every session behind closed doors in the Capitol. But this year, some groups unveiled new rhetoric from their spin doctors and wrapped themselves in the banner of “liberty!”

Armed with a shiny new populist slogan, the assault on local control came out of the shadows and unleashed a tidal wave of bills to limit the ability of citizens to influence the laws governing their neighborhoods and their cities.

Fortunately, reason and good judgment prevailed over the new sound bite. A majority of legislators in both chambers continue to understand that local control builds prosperity rather than hinders it. A majority still understands that the so-called “patchwork” of local regulations is actually good because it recognizes that Texans don’t like being told there’s only one way of thinking or one way of living. In fact, people who live in Fort Stockton may be proud that their city ordinances are different than those in Fort Worth, and vice versa. That diversity is what gives us identity and makes this state great.

Considering the onslaught of detrimental bills, cities emerged from this regular session relatively intact. We took some body blows, but we remain standing. Case in point? City officials were not able to overcome the power and influence of the state’s oil and gas industry, which succeeded in limiting - but not eliminating - local rules governing oil and gas development.

Political reality made it clear from the very beginning of the session that more than two-thirds of legislators would vote to prohibit cities from banning fracking. However, legislative leaders made it clear they support long-standing city regulations designed to protect health and safety in residential neighborhoods. Accordingly, H.B. 40 by Rep. Drew Darby (R - San Angelo) contains a clear list of permissible surface regulations, including commercially reasonable setbacks. Oil and gas companies that attempt to misuse the legislation to challenge those regulations will meet strong resistance from the League. (The League will create a clearinghouse to monitor legal challenges to existing drilling ordinances.)

On most other issues, cities completely fended off the assault on local control:

In 2013, lawmakers passed 23.7% of bills filed. This year, only 20.5% made the cut. This was ultimately a relatively “quiet” session, which is surprising in light of the “liberty vs. local control” dynamic.

City officials will need to think deeply during the interim about what this year’s philosophical attack on local control really means. If local control were no longer a good thing (we’re still a ways from that being so), what would happen to the “Texas Miracle?” Stay tuned.

The following sections contain summaries of the major city-related bills passed by the 84th Legislature. The governor has until June 21 to sign bills, veto them, or let them become law without his signature. The effective date of each bill is noted in a parenthetical following each bill described below. Some of the bills will become effective as soon as they are signed (e.g, “effective immediately”), others (unless vetoed) will become effective on September 1, and a few have special effective dates.

Future issues of the TML Legislative Update or Texas Town and City magazine will provide additional details on some of the bills described here, may include summaries of “straggler” bills that for various reasons weren’t summarized at the time of printing, and will provide other updates as appropriate.

The text of any bill is available at the Texas Legislature’s website.

How small, of all that human hearts endure,
That part which laws or kings can cause or cure.

Hundreds of harmful initiatives that would have done serious damage to Texas cities were defeated through the efforts of the League and individual cities. Among them were bills that would have:

Perhaps the biggest news of the session was the all out assault on “local control” in the name of “liberty.” The League created the “Big Government Index” mid-session to illustrate the scope of that assault. Ben Sargent, a well-known editorial cartoonist, illustrated the issue this way: 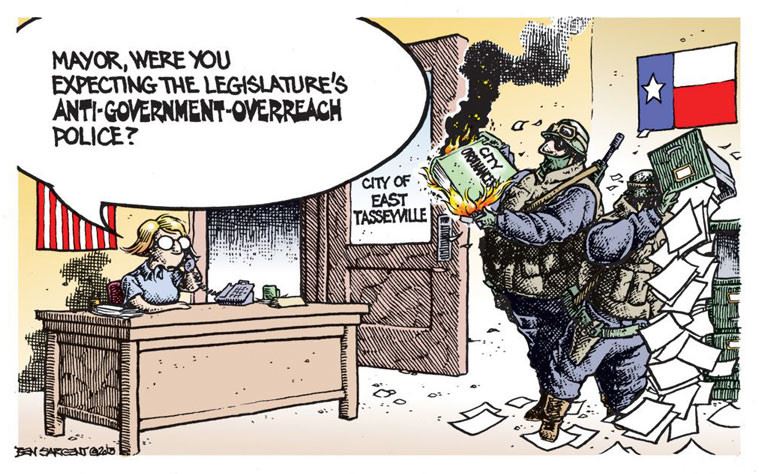 The good news is that the vast majority of bills in the index didn’t pass, and many never even received a hearing. In fact, only five bills on the index became law:

Some initiatives, other than those summarized in this update, would have been beneficial to cities. Despite the efforts of the League and individual cities, many didn’t make it through the process.