In 2016, the attorney general’s office filed a lawsuit against the City of Austin to require licensed carry at city hall, even though a municipal court is housed there. More specifically, the Austin city hall houses the city’s “community court.” According to its website, the court’s purpose is “to collaboratively address the quality of life issues of all residents in the downtown Austin community through the swift, creative sentencing of public order offenders.” The court “seeks to hold people responsible while also offering help to change behavior.”

The court is held in city hall, and state law prohibits any firearm in “a building or portion of a building” that houses a “court or offices utilized by the court.” Because of that, the city took the position that the entire building is off-limits to license holders carrying handguns. Even though no sign is required, the city posted a “no guns” sign (a handgun with a slash through it - see photo to the right) on the window, and a guard posted at a metal detector provides verbal notice that firearms aren’t allowed. 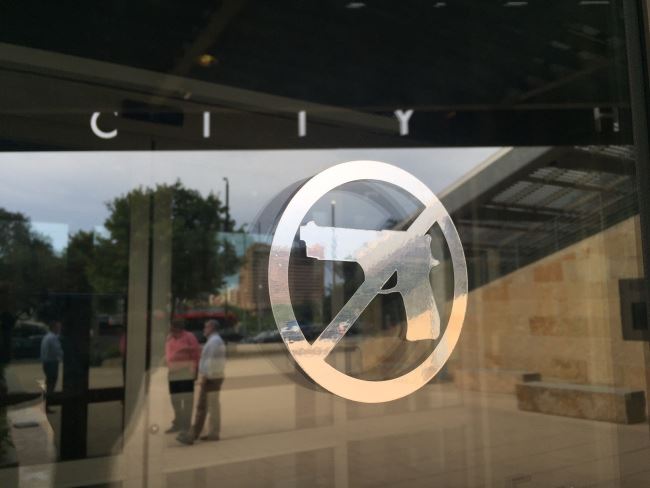 The attorney general’s lawsuit asked the court to order the city to remove its sign and authorize licensed carry in city hall. It also sought civil penalties from the city. In 2018, the district court judge in Paxton v. City of Austin disagreed, concluding that the attorney general has no jurisdiction to investigate, seek an injunction, or seek civil penalties for the display of any sign other than a “30.06” sign or verbal notice under that section. (The 30.06 sign is one that a business must use if it chooses to prohibit concealed carry on its premises. It is also used by a city, but only for the sole purpose of prohibiting licensed carry in a meeting room in which a meeting subject to the Open Meetings Act is being held.)

In a letter (PDF) explaining her decision, the judge dismissed the attorney general’s arguments based on the plain language of the law. Her conclusions can be summarized as follows:

What are the practical effects of the above ruling? Based on the advice of a city’s attorney, a city may wish to rely on the court’s letter, which is better-reasoned that attorney general opinions on the subject. That reliance would mean that a license holder may not carry a handgun into a building that houses a court or offices utilized by a court. No signage is necessary. However, some cities - like the City of Austin did - may deem it appropriate to post a sign of some type notifying the license holder that a building houses a court or court office.

What would the signs mentioned above look like? The sign certainly shouldn’t be a 30.06 sign because that type of sign would mean that the attorney general has authority over them and can sue the city. A better option might be a gun with a slash through it or a “no firearms allowed sign.” Even better might be quoting the Penal Code section prohibiting carry into the building:

All weapons are prohibited pursuant to Penal Code Section 46.03(a)(3).

An offense under that section is a third degree felony.

The above analysis relates only to courts and court offices, but it might also be relevant to the prohibition against carrying on the premises of a school sponsored activity or polling place during early voting or on Election Day.