House Bill 1378, passed during the 2015 legislative session, requires every city to annually report various figures related to the city’s amount of debt. A city can satisfy the reporting requirement in one of two ways: (1) compile the requisite debt information in a self-created report that is posted to the city’s website; or (2) complete the state comptroller’s online debt reporting form and either: (a) upload it to the comptroller’s website; or (b) post to the city’s website.

The local debt information required to be in the annual report, whether created by the city or by using the comptroller’s form, is as follows:

As cities reach the end of the 2016 budget year, they should seek the assistance of local finance officers, and possibly local legal counsel, to interpret the new mandatory reporting. Please contact Bill Longley, TML Legislative Counsel, with questions by email or (512) 231-7400.

The attorney general’s office has filed a lawsuit against the City of Austin to require licensed carry at city hall, even though a municipal court is conducted there. (A previous edition of the Legislative Update reported on a lawsuit filed by Waller County against the leader of Open Carry Texas. The Waller County lawsuit argues that: (1) the entire courthouse is off-limits to licensed carriers; and (2) the attorney general’s office doesn’t have as much enforcement authority over local governments as it claims.) 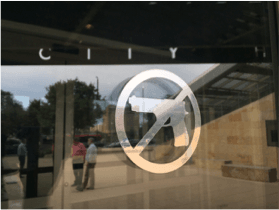 The attorney general’s office has since filed a lawsuit against the City of Austin, claiming the opposite. The Austin city hall houses the city’s “community court.” According to its website, the court’s purpose is “to collaboratively address the quality of life issues of all residents in the downtown Austin community through the swift, creative sentencing of public order offenders.” The court “seeks to hold people responsible while also offering help to change behavior.”

The court is held in city hall. Because of that, the city, like Waller County, takes the position that the entire building is off-limits to license holders carrying handguns. A “no guns” sign (a handgun with a slash through it – see photo) is posted on the window, and a guard posted at a metal detector provides verbal notice that licensed carry is not allowed.

The attorney general’s lawsuit asks the court to order the city to remove its sign and authorize licensed carry in city hall. It also seeks civil penalties from the city.

One of these pending lawsuits should ultimately provide guidance to cities that house municipal courtrooms and court offices in multi-use city facilities.